Park Place Signs (Hannibal, MO) is an expert at giving directions in more than more than one dimension. Since the early 2000s, when the company evolved from an engraving and trophy business into one of the nation’s leading suppliers of Americans with Disabilities Act (ADA) signage, Park Place is where sign companies go to purchase room identification and wayfinding signs that comply with ADA standards. The addition of a Mimaki JFX200 UV-LED flatbed printer has enabled the company to improve turnaround times, reduce overhead costs and deliver high quality signage that was previously unattainable with existing systems.

Park Place was established in 1980 as an engraving and trophy business using laser equipment and screenprinting systems to personalize nameplates and signage for retail establishments. The early 1990s ushered in a new era for sign makers following the passing of the Americans with Disabilities Act, as – among other things – it requires signage with tactile elements be installed in public areas. The company then began creating ADA compliant signage for healthcare and educational facilities, both locally and across the country. Because of its staff’s expertise with ADA requirements, by 2002 it grew to be a wholesaler to more than 1500 sign companies nationwide, providing ADA signage as well as expertise in the intricacies of ADA standards such as placement height and installation tips. Wayfinding and other signage remain a large part of the company’s business as well.

Bill Baker, owner and president of Park Place, brought his experience in vinyl production for vehicle graphics to the company when he purchased it in the late 1990s. As business grew, the company added more screenprinting equipment and personnel, utilizing up to three employees depending on workload. The demand kept growing. Bill understood from his previous experience that he needed to find a way to incorporate the cost- and time-saving features of digital production into the company’s screenprinting process.

Bill began researching flatbed printers from several vendors including Mimaki, Océ, Mutoh and HP. His criteria included high quality output with white ink, a dedicated flatbed table, low-heat UV-cure technology, and an affordable price point. “Once I saw the JFX200 printer, it all came together,” said Bill. The JFX200 UV-LED printer included all the “must-haves” required to seamlessly incorporate it into his existing operation. Bill worked with dealer PDS Equipment to acquire the printer and had it installed and running within just a few weeks.

“With the JFX200 printer, we have fewer touchpoints, so the bottlenecks we had using an all-screenprinting system have been greatly reduced,” said Bill. “Overall, we’ve increased our production speed, reduced our labor costs and improved our print quality.”

When most people think of ADA signs, the image of raised letters and braille on a solid background come to mind. Customers today want more than cookie-cutter signs, they want a consistent theme that requires more than simple plastic badges. Park Place uses several methods and materials, and relies on the high quality output of the JFX200 printer to enhance the output of many signs. For example, in the Exit to Courtyard directional sign, Park Place used 1/8-inch thick clear acrylic and printed the decorative accent and white background on the back using the JFX200 printer. The text and directional arrows were laser-cut to shape and applied to the sign’s front surface. White ink provides the ability to print on a number of clear or colored surfaces, on either the front or back – or sometimes both. The Hall Map sign uses 1/4-inch thick acrylic with the decorative accent and beige background printed onto the back of the material. The map was then printed onto the surface. White ink in the JFX200 printer gives Park Place the ability to broaden the range of materials it can use to fulfill orders.

Many of the ADA signs printed by Park Place are a set size such as 4- by 8-inches or 8- by 8-inches. The company uses jigs and fixtures to hold them in place. The JFX200 printer, with its 51- by 98.4 inch fixed flatbed area, provides this necessary capability, a feature not available on hybrid models. “The size of the flatbed table enables us to run special jobs of different sized media and pre-cut pieces, as well as the occasional larger print,” said Bill.

One of those larger pieces is a 4- by 8-foot Wall of Hope donor recognition plaque fabricated entirely of 1/2-inch thick acrylic. All surfaces were painted and then printed. The background is a printed flower graphic, and the donor names were printed directly onto the painted panels. Because the JFX200 uses low-temperature UV-LED technology, the painted surface did not incur any distortion during printing.

Adding the JFX200 printer has dramatically shortened the throughput times from job acceptance to shipping. “We now get jobs out, on average, 30 percent faster and have eliminated many of the costs associated with screenprinting such as screens and screen preparation. We are also able to utilize personnel in other areas of the company to improve our delivery dates,” said Bill. It also gives Park Place the ability to keep all the work in-house so the company can control the quality.

Park Place hasn’t entirely abandoned is awards roots. This Hannibal Cannibal piece is an award for an annual local race that attracts more than 2000 participants on Independence Day weekend. Park Place donates all the awards and participation medals. “A project this large with intricate details would not have been possible without the JFX200 printer,” said Bill.

“The Mimaki JFX200 printer is the single best investment I’ve ever made,” said Bill. “It has transformed our business. The more we use it, the more we can figure out what we can do, the better it makes as a company.” 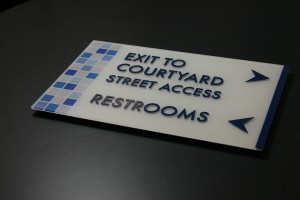 Exit to Courtyard: The JFX200 printed the decorative accent and white background on 1/8-inch clear acrylic.

Hall Map: The JFX200 printed the decorative accent and beige background on the back of 1/4-inch acrylic; the map was then printed onto the surface. 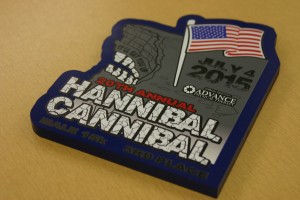 Hannibal Cannibal: The JFX200 was used to produce awards for a local race. 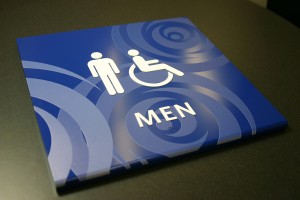 Braille: The JFX200 was used to apply the decorative accent on the surface of 1/2-inch acrylic; the sign was completed by adding laser cut text and friction-fit braille beads.

About the Author: parkplace